“If we knew what we were doing, it would not be called research, would it?” – Albert Einstein

The great Einstein really knew what he meant when he said that and I sure found out when I did my research project/thesis for my Masters degree. I definitely had no clue what I was getting myself into but I can confidently say that the end result was more than gratifying. This project opened my eyes to the benefits of resource recovery, the intricacies of natural metabolic pathways and the large impacts the smallest organisms can have on the environment.

I remember saying that I’d share my journey with you and I think it’s time I keep up my end of the bargain. So, to do that, I’ll be publishing a series of posts on the different topics my research rested on just to give you an idea of what I got up to in the laboratory.

But first, I’ll give an overview of my research:

I evaluated the effects of carbon dioxide concentration on algal growth and ammonium oxidation. To accomplish this, a mixed biomass of algae and bacteria was inoculated with a medium called BG11 in a sequencing batch reactor (SBR). The algal species were 2 green (Chlorella and Scenedesmus) and 2 blue-green (Anabaena and Spirulina) strains. The bacteria was provided by activated sludge from a dutch wastewater treatment plant. For those who do not know, activated sludge is sewage which is being (actively) broken down by aerobic (need oxygen to function) microorganisms. BG11 is a growth medium containing all essential nutrients, inorganic and organic, needed for algal and microbial proliferation (assimilation into biomass). In this study however, the BG11 medium was used to mimic municipal wastewater. Simulation of day/night scheduling was achieved by timer-controlled lights and the SBR operated under 24 and 12 hr cycles in 2 different phases of research. 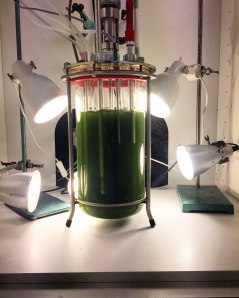 Further, nitrogen and carbon compound concentrations and other physico-chemical parameters were measured and used to determine the success of the mixed biomass. Based on those measurements, I concluded that the mixed biomass excellently removed ammonium from the “wastewater” and that the carbon dioxide concentration did not affect the rates of algal growth or ammonium oxidation.

Another aspect was one which I knew nothing about, computer modelling. I used the results from the experiments to predict the values of the half saturation constant for both algal and bacteria, separately. I used a program called AquaSim. This was a challenge but a challenge I welcomed.

Now that you have a general idea of what I did, below is a list of the topics I wish to cover in the coming weeks:

I’m so glad to be sharing this with you in hopes that you learn just like I did.  And remember,

“Science is gorgeous. Chemistry is a beauty best observed in a laboratory. The colours, the textures, the smells (some not pleasant), the unpredictability, the laughs, the tears, the encouragement…nothing compares. You might find you enjoy some areas in chemistry more than others, and that is okay. But enjoy…ENJOY!” – the Awkward Chemist

Post #1 is live! #CarbonDioxide #Algae #AmmoniumOxidation #Nitrogen
Over the course of my thesis, you would have seen me posting a lot of pics of the different apparatuses and the microorganisms. Now it's time to find out the details of the project. Every week I will be discussing a topic. Stay tuned!
It has truly been a while. Go check out my new post. Link in bio. #theAwkwardChemist
It’s the weekend! 💃🏾💃🏾💃🏾Even my biomass knows it! #boogienights #theawkwardchemist